Verona were for a long time regulars in Serie A and their most successful period came in the 1980s when they won their only Scudetto and reached two Coppa Italia finals.

After relegation in 2001-02 they slipped further and despite good support from their loyal fans they subsided into the lower divisions. Their demise was all the more galling given that Chievo, a team from a tiny suburb of Verona had against the odds established themselves in Serie A. To the fans' relief, the team have clambered back up into competition and into Serie A.

'A season with Verona' by Tim Parks is a fascinating and often funny book providing an insight into the ups and downs of following an Italian team. It is reviewed on our Books & DVDs page.

The stadium, shared with Chievo is close to the city centre, and just a ten minute walk from Verona's main train station, Porta Nuova.

Ticket information can be found on the club website under the 'Stadio' section. 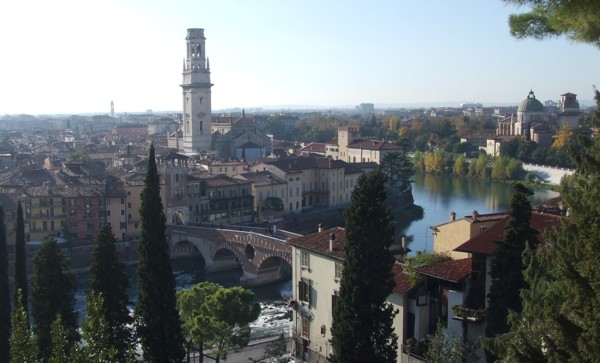 Easily reached by air from the UK, Verona, in the Veneto, is one of Italy's loveliest towns. A thriving town in its own right, it's also an appealing tourist destination for weekend breaks. It's rich in archeological sites and has a beautiful medieval centre. The Roman Arena, where concerts and operas are performed in the summer, is the city's major site (original capacity 20,000), but the so-called 'Juliet's balcony' is also a principal port on the Shakespearian tourist trail.

You can spend a long time exploring the narrow streets lined with palazzi that make up the historic centre (there's also a mini-train tour if you're feeling lazy). Some of the churches contain fine works of art, while the Teatro Romano over the river has excellent views from the terraces where the ancients watched plays.

If you're planning a longer stay, or want to see more of Italy, Verona is usefully located for Venice or for the lovely Lake Garda. It's easy to travel by public transport from the lake to Verona, so you could combine football and natural beauty if that's your taste.

For more detailed information on things to do and where to stay in Verona visit our sister website Italy Heaven - Verona.