Founded in 1908, the club first entered Serie A in the 1980s. Since then they've spent serveral periods competing well in Serie A, mixed in with a few relegations and promotions. As one of the few southern clubs to compete in Serie A in recent years they have injected some welcome colour.

The stadium is located out of town, off the Autostrada connecting Lecce with San Cataldo, 6km from railway station. 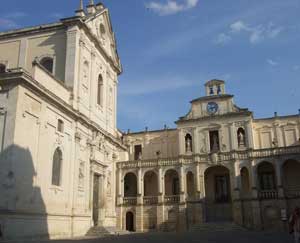 Tickets to Lecce home matches can be bought in the town at selected outlets listed on the club website (under Biglietti/ricevitorie).

Lecce is a beautiful historic town in the Salento area of southern Italy, once described as the 'Florence of the Baroque'. The town contains fine baroque churches and palaces, a Roman amphiteatre and an interesting regional museum. It's most easily reached from the UK by flying to Brindisi Airport (Ryanair budget flights).

As well as wandering through Lecce's heart: the Duomo and Piazza Sant'Oronzo, and the gardens of the Villa Comunale, tourists can head off to the nearby coast or northwards to Puglia's trulli district.

For more detailed information on things to do and where to stay in and around Lecce visit our sister website Italy Heaven - Lecce.