The tradition and passion 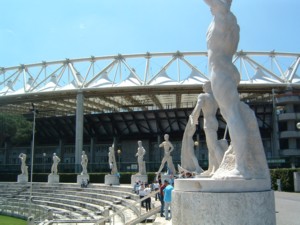 Italian football has a long and proud tradition, and is of immense importance to the culture of the country. Italy embraced the sport, encouraged by British ex-pats, at the end of the nineteenth century (the nation's oldest football club is Genoa, founded in 1893) and have gone on to produce some of the worlds biggest and most successful teams. Players like Paolo Rossi, Roberto Baggio, and Paolo Maldini have become household names around the globe while the Italian national team have won four World Cups, just one fewer than Brazil's record five.

Nowadays, in a country which is mad about spectator sports, football - il calcio - is the most popular sport of all. If you overhear two Italians talking animatedly, there's a fair chance they're discussing football. We've overheard two businessmen in a piazza in southern Lazio debating the merits of Juventus's various strikers, listened to a grandmother's reminiscences about her youth as a Cagliari fan, crammed into a Roman bar to watch Italy's World Cup games and argued with vegetable-sellers about referees.

Football is a passion, a dream, and, for many, a way of life. Following a team doesn't start just before kick-off, with a beer, instead it floods every aspect of the fan's life. Fully-grown adults with responsible jobs will lie awake all night worrying about a derby match, they'll go to work with their lucky football necklace or keyring round their neck, they'll sport their team's colours on every conceivable occasion, they'll boycott food brands which sponsor rival teams, and no-one will find any of this at all odd or unusual.

One reason why football is taken so seriously here is that it gives fans a place and a voice. In a country where few citizens have much faith in the state or judiciary, football gives them a chance to be witnesses and participants. Most machinations of Italian society go on behind closed doors, whereas football takes place on an open stage. It has a direct meaning to many young disenfranchised people, and a direct impact on their lives. Of course, that's not to say that corruption and paranoia don't infiltrate football too. Every week you'll hear conspiracy theories, allegations of bribes and match-fixing, referees accused of bias. But at least those crucial 90 minutes take place in front of an audience.

Apart from our social theorising, we've experienced at first hand one of the most attractive aspects of football in Italy. This is the sense of togetherness in a stadium. There's a lot of prejudice in Italy, and a lot of stereotyping. But in the stadium everyone is a fan, and accepted as an equal - whatever their gender, colour, age, nationality. When the fans' voices are raised in song, there's a unity which is uplifting and hard to find elsewhere.

Italy's top division is Serie A, formerly made up of 18 teams but expanded to 20 in 2004. The title is the scudetto, or shield. Serie B is the Italian second division, followed by Serie C1 and C2 and then Serie D. The football season runs from September to May. In the first half of the season teams play each opponent once, alternating between home and away matches. At the end of this first phase you may hear references to 'winter champions', the team leading Serie A at the halfway stage. Then the teams play the same sequence of opponents in the same order, with the match location reversed.

The Italian Cup - Coppa Italia - doesn't have the same history or importance as the English FA Cup (losers refer to it as 'the umbrella-stand'), although winners prize it as a route into European competition. It entitles the winning team to a round badge in the colours of the Italian flag. All cup matches, even the final, are played in two legs: home and away. Matches are played midweek, to fit around league and European fixtures. There is also a Supercoppa, a pre-season cup disputed between the winners of Serie A and the Coppa Italia.

Every so often, outbreaks of violence mar the game in Italy. Usually this is manifested in confrontations between groups of ultras (organised hardcore fans) and the police. There are rarely serious injuries - although it does happen - but it is an ugly aspect of the sport. Police take up a hostile stance to supporters - armed riot police outside stadia are often a surprise to the foreign visitor. Regular fans aren't likely to get caught up in violence, but if you are unlucky enough to be a game where there is trouble, you may be inconvenienced by the match being interrupted, by having to move fast past trouble-spots, or by exposure to lingering teargas.

At a higher level, there are big commercial and political interests at stake in Italian football. Some of the ubiquitous conspiracy theories have turned out to be based in fact, as proved in 2006 when the Juventus match-fixing scandal hit the headlines and resulted in a number of clubs punished.

Financial problems are also increasingly common, some teams permanently teeter on the brink of bankruptcy, while others go under. Clubs have to prove a certain level of financial viability before they are allowed to take part in the championship, and every year there are some clubs who only just make it and a few who don't. In recent years this has led to Pisa, Venezia and Messina being demoted to the lower leagues.

Some good books have been written over the years about the intense and sometimes crazy world of Italian football, including a masterpiece by Tim Parks. You can find a selection of recommended books and DVDS on our Books page