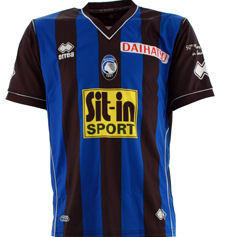 Atalanta Bergamasca Calcio hail from Bergamo, in Lombardia, Northern Italy, situated to the north-east of Milan. Dating back to 1907, the sporting society was formed from the merger of two local clubs, Bergamasca (colours blue and white stripes) and Atalanta (black and white stripes). Keeping the mythological name and blending the colours, the organisation was the basis for the modern football club.

Atalanta have had a quiet history with only one major cup win. In recent years they have been something of a yoyo club, moving between Serie A and Serie B. 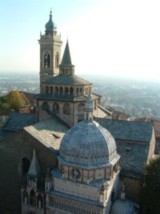 To get to the stadium from the railway or bus station, take the ATB bus number 9b or 9c.

A plan of the stadium showing the different sectors, along with prices for forthcoming matches, can be seen on the club website's 'biglietti' section. The vocal home fans occupy the north stand (curva nord) of the stadium. Tickets can be bought from Lottomatica outlets in the town. Women and children should check for reductions.

Bergamo is a town of two halves, the upper hillside town (Bergamo Alta) and the lower town (Bergamo Bassa). Like many Italian towns, the attractive older settlement is at a higher level than the newer developments, which are based around the town's railway station. A funicular links the two towns.

The town is a popular weekend resort, and contains many sights of interest and architectural beauty, including the medieval Palazzo della Ragione and Santa Maria Maggiore, where local composer Donizetti is commemorated. Even higher than Bergamo Alta, and reachable by a second funicular, is the Castello, which offers superbly atmospheric views over the historic town.

For more detailed information on things to do and where to stay in Bergamo visit our sister website Italy Heaven - Bergamo.