Founded in 1915, Livorno have spent most of their time in the lower leagues but rose through the divisions to reach Serie A in 2004.

Following promotion they had four seasons in the top flight and had their first taste of European competition when they qualified for the UEFA Cup in 2006. After finishing bottom in 2007-08 they were relegated to Serie B but bounced straight back up the following season.

The stadium is located to the south of the town, close to the sea. From the railway station take bus number 1. 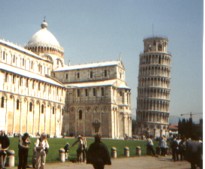 Tickets to Livorno home matches can be bought in the town at selected outlets listed on the club website (under Biglietteria / acquisto biglietti). Tickets for some matches may also be available online at bookingshow.com.

Livorno is a busy port on the Tuscan coast and not on the tourist trail. Handily, the city is situated close to Pisa and its airport so if you wish to see a Livorno game you could base yourself there. Pisa itself has an abundance of sights and also has good transport connections to other tourist destinations such as Lucca and Florence.

For more detailed information on things to do and where to stay in and around Livorno visit our sister website's guide to Livorno.